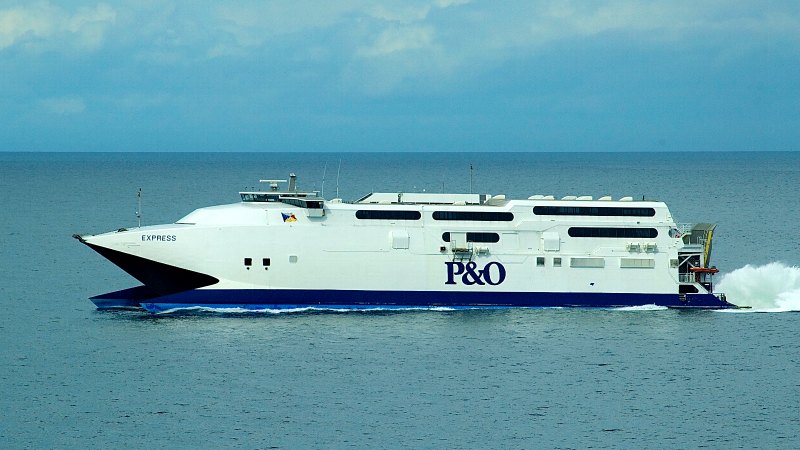 An Incat 91 metre wave piercing catamaran, Express has been sold after a 15 years career with UK ferry operator P&O Ferries.

An Incat 91 metre wave piercing catamaran, Express has been sold after a 15 years career with UK ferry operator P&O Ferries.

During her delivery voyage from Tasmania to Spain in 1998, she set the record for the fastest Atlantic eastbound crossing, making the 3,125 miles run from Manhattan to Tarifa, Spain in 3 days 7 hours 54 minutes, travelling at an average speed of 38.877 knots. During that same voyage she became the first passenger ship to cover 1,000 miles or more in a single 24-hour period. In covering 1,018 nautical miles in one day, beating the 868 miles record set by the liner ss United States in 1952.

Initially entering Spanish service as the Catalonia, Owners Buquebus added the Express vessel to their charter fleet and soon after she took up service with P&O on the English Channel. Since 2006 the craft has operated across the turbulent North Channel between Northern Ireland and Scotland.

In 2013 her operator invested in a major £500,000 refurbishment, enhancing her lounges with more comfortable seating areas, refurbished dining area and an impressive Club Lounge for those who want a little extra luxury on board.

Equipped with a full width stern ramp for easy vehicle deck access, a full width enclosed bridge and a unique and impressive glass atrium over the stern, Express is exceptionally well maintained.