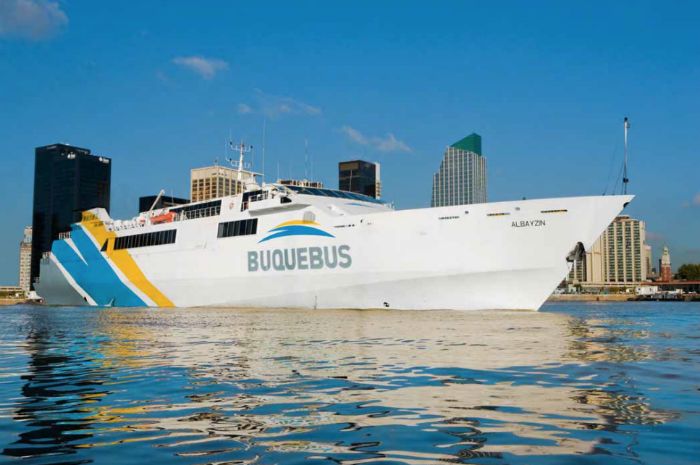 Albayzin was designed and built by Bazan, a shipyard established in 1947 and Spain’s premier shipbuilder. At the time of delivery, Albayzin was one of the most expensive fast ferries ever built, reportedly costing around USD$25 million.

Albayzin was designed and built by Bazan, a shipyard established in 1947 and Spain’s premier shipbuilder.   At the time of delivery, Albayzin was one of the most expensive fast ferries ever built, reportedly costing around USD$25 million.

Mestral in the Catalan language refers to the strong northwesterly winds that in blow along the Mediterranean coast between Italy, France and Spain and clearly the Bazan designers envisaged many similarities between the new hull high speed form and this famed natural phenomena.  The Mestral winds can appear suddenly, they are usually strongest during the day and they often exceed 35 knots average wind speed.  The Mestral winds also have the reputation of bringing good health as they dry out the land, blow away pollution from major cities and thereafter, generally ensure more sunshine.

Albayzin features an aluminum alloy deep-V hull form and longitudinally, the vessel is divided into eight watertight compartments under the vehicle deck.  In its current configuration, Albayzin offers capacity for 450 passengers and up to 84 cars although, should higher capacity be required, it is noted that sisterships subsequently had passenger capacity increased up to 590 passengers.

Albayzin’s emergency evacuation arrangements consist of four marine evacuation slides, two on each side, with each slide serving liferafts of 1 x 100 persons and 1 x 50 persons.

Albayzin is powered by four Caterpillar 3616 medium speed engines each rated at 5,400 kW.  The engines drive four KaMeWa waterjets through a Voith gearbox.  The outboard waterjets are utilized for steering and the inboard waterjets serve as booster jets when operating at high speed.

Other features of Albayzin include:

Throughout its service life Albayzin has operated around the world, including: